Posted on November 7, 2008 by mayfairgirl 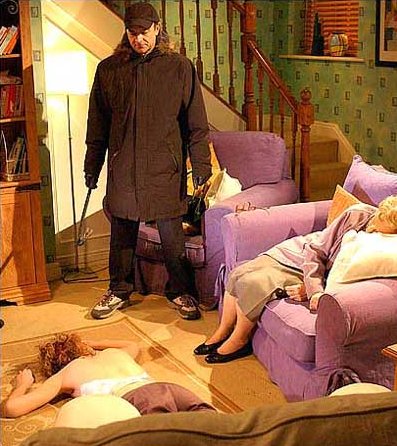 Tina arrives at the house and brought a horror DVD for them to watch. Right
behind her is Gail and wants to know what is the plan for dinner. (Yes, dinner without you..) She says she is going to lay low and do the
weekly shop.

The start to watch the movie and talk about the last time they were really
scared. Then it gets hot and heavy and Gail comes back. They jump up and adjust their clothing. Gail
asks David to help her bring in the groceries.

David leaves to take Tina to the bus. Gail apologies for interrupting. David
is adamant that nothing happened and they were just watching a film. Yeah,
okay.

Gail says she’s glad he’s found someone he likes, (more like fancies)
but warns him to be “careful”. She
adds, “But if you’re going to embark on an adult relationship…” she
starts to say, but he stops her. “No we’re not, Mum, and Friday’ll be
great!” and quickly leaves.

are you saying, that you don’t want to see them?” she says. “I
think that’s what I am saying, yes,” says Ryan.

Maria is busy planning the meal for their wedding reception. And is being
inundated with questions about what he needs of the trip to Birmingham. In the salon, Maria is on the phone sorting
out the flowers while Audrey does Lauren’s hair.

In the salon Maria is making more wedding plans David says he doesn’t know
why she is getting so worried, when everyone knows she is “Up the Duff”.

In the factory office, Maria takes the flower brochure into the factory to
discuss the prices with Liam. Carla looks up the hotel website. “Oh Liam,
you’re in luck,” she says, “you wanted a mini bar they’ve got them,
have a look at the website.” (What hotel in the world doesn’t overpriced
mini-beverages) “Not now, eh,” he replies.

Sally enters and asks Liam to look at her machine as it doesn’t seem to be
working. He tells Maria he’ll see her
in the Rovers at dinner time. As Maria starts to leave, Carla proceeds asks if
she’s ever thought about violets for the wedding.

“Violets?” asks Maria. “I read somewhere they’re supposed to
represent fidelity!” she replies.
Was she always this evil?

At dinnertime, Maria and Audrey are in the pub talking about flowers when
the lovely Carla comes in. Maria overhears Carla’s conversation with Lauren
about how she has to take it easy as she is gearing up to party during her trip
with Liam in Birmingham. Maria
continues her conversation with Audrey saying she doesn’t trust Carla and knows
that Liam is faithful.

Michelle is STILL worried about Ryan leaving her and if she wants to get to
know Alex.

Kelly is trying to get in on Vikki’s business. And fails.

Lauren blanks Darryl, until she gets a free kebab.