Update for Tuesday, April 14. Let’s All Get Married in Andalusia

The Big Lie and The Incredibly Stupid Lie

It’s the continuation of last night’s episode and Leanne is storming out of the Rovers and off to her apartment where she complains that she could become prime minister but all anyone would ever think about the fact that she’s an ex-prostitute. No matter great the accomplishment, people will always obsess over your dirty, dirty sex life. 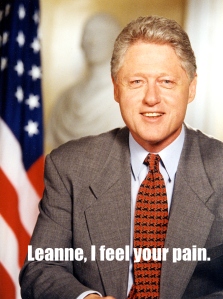 Anyway, Dan reminds her that she was with him in hospital on the night in question, so she, Dan, and Janice all march over to the Rovers for a face-off across the Rovers with Michelle, Liam, Vernon, and Liz. Dan tells Michelle the truth, which Liz says Harry can confirm. Michelle is embarassed but does not apologise. Leanne leaves, cheating Deirdre and Eileen out of that fight they were hoping for. Later, Michelle tries to apologise to Leanne but Leanne tells her that she can stuff her sorries in a sack.

During all this, Lloyd is putting the screws to Becky to come clean as he can’t keep hiding from Michelle. She considers this but then realises that if she tells the truth, she’ll screw up any chance she may have had of getting back together with Jason. After hearing about what went down at the Rovers, Roy admonishes Becky to make things right, seeing as because she withheld the truth, Leanne is out of a job.

Becky feels so bad, that she skips a birthday drink with Jason and the gang, to go hang out with Roy.

You’d think Michelle would stop at making an arse of herself once in a day, but no, she later jumps in Lloyd’s cab as he leaves to get a fare. During the trip, and with the fare in back, she needles Lloyd about his lies and changing stories (first a casino, then lapdancing). Unable to take the pressure, Lloyd is about to tell Michelle the truth when he suddenly blurts out: “He’sactingweirdbecausehe’sgoingtoproposenoreallyIswear!”

Michelle at first doesn’t believe him but then, as she realises that this is suddenly All! About! Michelle! it’s now truly the only explanation that makes sense. Even when Lloyd throws in some total horseshit about Steve getting a giant diamond and looking for a castle in Andalusia to get married in.

Liz has decided Michelle is driving her round the enough to consider Vern’s idea of buying his buddy Nelson’s bar. She tells Deirdre that it’ll put the spark back in the relationship.

Father Ted, Ted is cleaning Amber’s chunder off the wall when he pulls a giant strip off the wall. Either he wasn’t using a mild abrasive or somebody painted latex over lead-based paint. He manages as best he can so when Audrey comes over to inspect, Tina has to stand in front of the bare spot and the planter is on top of the cigarette burns. Audrey agrees not to tell Gail about the party.

Theresa and Darryl return from their lunch (Theresa’s was of the liquid variety). Theresa ingratiates herself a little more to Darryl but telling him some made up stories about his childhood. It’s enough, anyway, to get them into the Rovers for more drinks where Theresa complains that giving birth to Darryl was like passing an articulated lorry (ie: a truck with a trailer).

They head back to Jerry’s with sausages and chips, which means Finlay doesn’t have to eat his salad with Jerry. Mel comes home and sees this and shakes her head, wondering how much longer she can stand it.

16 Responses to Update for Tuesday, April 14. Let’s All Get Married in Andalusia