Update for Wednesday, June 23 – To Catch A Slug 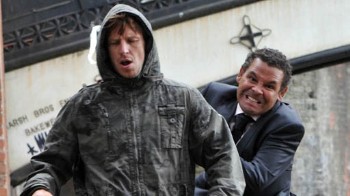 At the Dobbs, Jack is chatting with Ty and Molly about prospective flats. Molly mentions that Jack might enjoy being away from their rowing. “We don’t row,” Tyrone says obstinately. Ty keeps making his case for Jack staying put.

It is Becky’s last day before sentencing. Over brekky, Steve is suggesting to Becky that they take a day trip to Blackpool or something. Becky says she just wants to stay home and hang out.

Peter has succeeded in seducing the blonde nurse he met at the Rovers, and they are frolicking and getting dressed in the living room of Peter’s flat, when Ken bring in Simon, who breaks into a grin of delight. Ken, meet doorbell. Doorbell, meet Ken.

Joe is off to receive his sentencing. Tina wants to come along, but Joe wants no family there, and fobs her off.

Tyrone and Molly leave the house, bickering about Jack’s decision. Tyrone thinks it’s their arguing that is driving Jack away. He wants it to stop and also wants Molly to help derail Jack’s moving out plans. They get to the garage and Kevin sends Ty out on a call. He then grabs Molly for a slobber in the garage.

Lloyd has the fancy taxi out as has to drive a married couple to their wedding reception. He asks Steve to mind the switch. Steve pours out a stream of low-pitched whinging that no cabbies have sighted Slug as yet.

Molly and Kevin are necking in the garage, when Sally is heard hollering her way in. The cheaters exit, Molly says a brief hello to Sally. Sally points out to Kevin that she has gone over the books and it seems outcalls (recoveries) are down. She points out that the recovery truck is expensive.

Lloyd drops off the married couple. He tries to radio Steve, but the radio reception is crap. Then he notices a few punks across the street having pints. Including Slug! Frantically, Lloyd tries the radio again, no go, and he can’t find his mobile.

Connie and Jack are having lunch at Roy’s. Connie asks how the house hunt is going, and once again says her offer of lodgings remains on the table. And Jack, finally, agrees to move into her place. He says that the newlyweds need the house to themselves. Connie is pleasantly surprised that Jack accepts.

Roy and Becky are talking and Roy stammers out, “I wish you wouldn’t get yourself into these predicaments,” Becky is hurt and reminds Roy that she was stitched up. Roy says she’s made an enemy of a law officer. Becky sharply reminds him that that same law officer used to get jiggy with her in his cruiser.

Lloyd has gone to a payphone and finally reaches Steve, who charges out to the site of the Slug sighting. Lloyd ventures nearer to the drinking blokes. He sees Slug in an alley and runs him down with an impressive flying tackle. Lloyd binds his wrists and makes quite a tidy citizen’s arrest.

Cheaters Incorporated have taken their planning back to Dev’s shop. Kevin has decided that he can use the excuse of more call-outs to create rendezvous with Molly. She wonders what to tell Tyrone. Jack comes in then, to enlist Molly’s help in breaking the news to Tyone that he will be moving out.

At the Barlows, Blanche pulls no punches in lambasting Peter for being “caught inflagrante” that morning. She goes on to accuse Peter of having a different floozie in his flat every week, and of course, she feels sorry for Simon and thinks he should be the priority. All Ken has to say is that in future they should coordinate more carefully when Peter is entertaining. Blanche is a bit appeased to learn that Naomi, the blonde, Naomi, is a nurse in a top hospital. I think it is nice that Peter is single and has sex with other single people.

Steve roars up to Lloyd’s location, and after a bit of a wander locates Lloyd in the alley with his prisoner. “One sniveling scumbag at your disposal,” Lloyd proclaims. They muscle Slug into the car.

They drive Slug to a remote location and begin a rather limp interrogation. This gets nowhere fast, and Steve pulls Lloyd out of the car for a conference. “Right, beat him up,” Steve orders. Lloyd demurs, saying he doesn’t go in for roughing people up. “But he’s not scared of me, “ Steve whines. They finally agree that Lloyd will hold Slug, and Steve will slug Slug. Steve tries, makes a fist and ends up shaking Slug like a dirty floormat.

Roy apologizes to Becky for his haphazard way of telling Becky that he worries about Becky, and basically just wants her to be safe and sane…and by way of apology, he offers her a hug, a huge gesture on his part.

Lloyd critiques Steve’s rough-up technique. He says Steve is harder on Amy, and wonders if they should give Slug a gold star chart and put him on the naughty chair. Steve wonders who Slug is truly scared off…suddenly inspired, Steve shoves Slug in the boot…whereupon he is brought back to Becky.

Jacks is overdoing it a bit in terms of prepping to break the news to Tyrone gently. Molly advocates it just be done straight away…and that it’s Tyrone’s problem he doesn’t like his wife hopping up and down on his boss change. And that Jack doesn’t need Tyrone’s permission to do anything.  Tyrone slopes in and flops on the couch. Molly announces that Jack will be moving into Connie’s. Tyrone’s expression blackens immediately.

Joe returns from sentencing and has gotten community service – which he will perform after his psych evaluation.

15 Responses to Update for Wednesday, June 23 – To Catch A Slug